skip to main | skip to sidebar

Sharon spent quite a bit of time during the last week planning the area behind the garage. We have taken to calling it our hidden garden. Sharon did most of the research because it's the kind of thing she likes to do.

We don't have any kind of software that helps with this process, so we winged it with pictures of the plants laid out on photographs. Excuse how unprofessional they look. LOL

We ended up choosing a Japanese maple to plant in the planting bed in front of the wall. Our current plan is to get an Acer palmatum ‘Sherwood Flame,’ but we could probably be persuaded by a 'Bloodgood.' We like them both.

We're going to go ahead and list the plants because it helps us later when we go shopping, or have questions about the plan, so here goes...
In the planting bed directly behind the garage—in keeping with the color scheme—we're hoping to put in two hellebores: one burgundy, and one apricot. Of course, since most of the varieties out are patented, we're not really sure what we'll be able to find this fall when we go shopping. At the moment, Sharon thinks she could buy:


We're also going to plant quite a few Heucharas because they provide some great color and tolerate mostly shade. Sharon actually already ordered some on clearance (oops); she could not resist $6 a plant. She ordered the Heuchera ‘Cajun Fire’ because she liked that the color changed throughout the season. Also, the color change will be out of sync with the Japanese maple, which will hopefully be really fun. 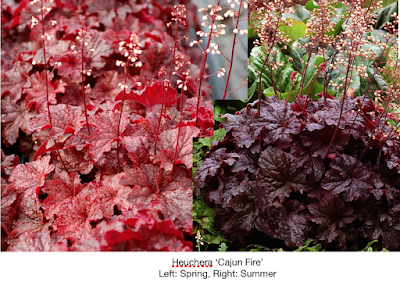 The iris in the corner is an Iris x pacifica ‘Big Wheel’. 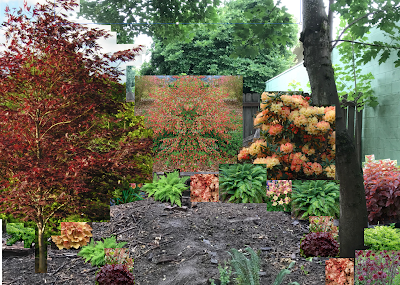 The larger shrubs we plan to plant along the back fence: 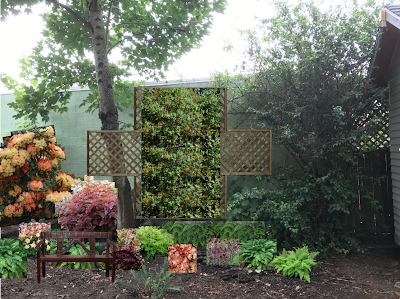 In front of the wall, to the left of the maple, we plan to plant a Physocarpus opulifolius 'Hoogi018' (Angel® Ninebark).

We would also like to install some sort of trellis on that ugly cinder block wall. If we manage to get something put up, we're expecting to plant a Lonicera ciliosa (Orange Honeysuckle) because it is a native, and will tolerate dry shade once it's established.

The rest of the beds will be filled in with a variety of plants, as we can find them. (This is a list of possible plants, we won't end up with all of them. This is just a starting point for when we go shopping.):

We'll be adding more as we go shopping and as we find more plants that tolerate dry shade. We might also try a few plants that prefer full sun just to see how they do.